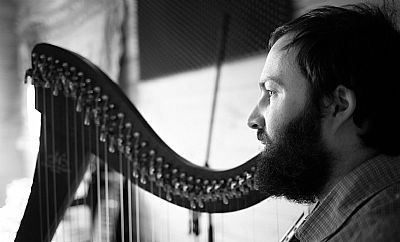 Originally from County Down, Ireland, Fearghal has been playing traditional harp for over twenty years and classical harp for more than fifteen. After studying at Aberdeen University, he stayed on in the city, teaching both privately and with Scottish Culture & Traditions, and performing with many of the city’s orchestras, in solo concerts, and with several ceilidh bands.

Over the years, he has won many of Ireland’s top harp competitions, including The Carolan Festival, Keadue, Co. Roscommon (2008 & 2015), as well as Senior Harp Solo and Voice with Harp at the Pan-Celtic Festival (2014 & 2015) against competitors from the six Celtic nations. In 2017, he won the Traditional Open and James Scott Skinner Open sections of the Aberdeen and North-East Music Festival – the first time in the festival’s history that a non fiddle-playing competitor had won the latter.

Before teaching and touring with SC&T (FestiRibe, Denmark, in June 2016), he worked as a cocktail musician between 2010 and 2014 with Swan Hellenic Cruises, which enabled him to travel around Northern and Mediterranean Europe, Africa, Asia, and even parts of the Middle East. At the start of 2014, he completed a circumnavigation of South America with the company as the leader of a trio of musicians.

Currently based near Chambéry in the south-east of France, where he teaches, plays and tours with local groups, including AMTrad,Fearghal regularly collaborates with other harpists and organises the annual National Harp Day there in conjunction with Harp Ireland. He also frequently returns to teach and perform in both Scotland and Ireland. His main interests are the music of Turlough O’Carolan, which served as the basis for his first CD in 2011, traditional music from the Pan-Celtic countries, re-discovering forgotten or lesser-known works and baroque music for harp. In addition to a wide range of pieces which he has arranged for solo harp and harp/mixed ensemble, he has composed around fifty tunes to date. His latest CD of Celtic Christmas pieces is also available now in digital download format. 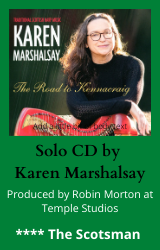